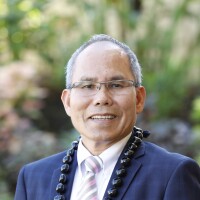 Alex and his wife Janette Tam came to BYUH for their first mission in January 2020 from the Bay Area, California. He was born in Vietnam; however, he met and married his wife Janette 36 years ago in California. Alex immigrated to Provo, Utah during the fall of South Vietnam to the communist party from the North. He was sponsored by a member of the Church of Jesus Christ of Latter-Day Saints. Alex joined the Church a year later. He got an AA degree from what is now UVU and worked as an account.  However, he was not happy with that and went back to attend Cal State Long Beach in Southern California and got his EE degree. He got a job with Signetic and moved up to the Bay Area in the early 80s. Four years later while working for HP and getting his master's degree at the same time, he met Janette in a piano class and got married to her that year. Four months after their marriage, Janette joined the church and they were later sealed in the Salt Lake Temple with their first daughter. Together they have 3 daughters and 7 grandchildren. At BYUH, Alex is currently serving as a Maxient Administrator for the school and also as a Maxient Residential Life Recipient.