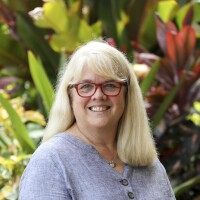 Sister Sylvia Webster was born in Salt Lake City, Utah, to parents she says who served the Lor. She is No. 5 of 10 children and says her large extended family has influenced her throughout her life. Sylvia is married to David R. Webster and together they have sought to serve the Lord and are the proud parents of seven children and 26 (and counting) grandchildren. She is editor of the Nelson News -a monthly family newsletter with a large circulation. Sylvia also graduated from the University of Utah with a bachelor's in family and consumer studies before starting a family and traveling the world with Dave. BYUH is the Webster’s third mission together. They have also served in the Brazil Curitiba Mission and the Nauvoo Illinois Temple Mission. Sylvia has served for many years as an ordinance worker in the Bountiful Utah Temple and more recently in the Nauvoo Temple as well.