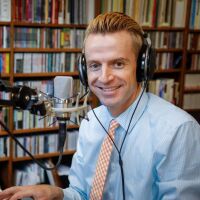 Dr. Daniel Henderson teaches Songwriting, Jazz Improvisation, Street Band, the World Jazz Orchestra, and is the Music Production & Technology lead for the instrumental music area at BYU–Hawaii. Before moving to Hawaii, Daniel taught Jazz Harmony and Jazz Improvisation at Harvard University, where he was an 8-time recipient of the Harvard University Certificate of Teaching Excellence. The Harvard Provostial Fund and Elson Family Foundation gave him awards for innovation in undergraduate education, and he regularly sat at or near the very top of Harvard College’s “Q” teacher rating system in both the “Overall Instructor” and “Overall Course” categories, with typical scores at or near a perfect 5.0 out of 5 in both categories. Daniel believes that intellectual rigor, a sense of humor, and a feeling of wonder and awe are essential elements in the classroom.

Daniel holds DMA and MM degrees in Jazz Composition with Academic Honors from the world-renowned New England Conservatory, where he studied privately with composers Bob Brookmeyer, Ken Schaphorst, and Michael Gandolfi. Daniel was an academic standout at NEC: He carried a 3.96 GPA over six years of graduate study, scored 100% on all four graduate-level placement exams (Classical music theory, ear training, analysis, and Jazz theory & ear training), and was inducted into the Pi Kappa Lambda National Music Honor Society. He played lead trumpet in both of NEC’s big bands, the Salsa Ensemble, and played drums in the West African Drumming Ensemble. Daniel was Assistant Director of the one-of-a-kind NEC Jazz Composers’ Workshop Orchestra for three years, shepherding dozens of young composers through the process of composing, revising, conducting, and communicating with a band. Upon graduation, NEC bestowed on Daniel the Gunther Schuller Medal—the Conservatory’s highest honor, awarded to one “extraordinary” graduate per year, citing his “extraordinary contributions to the life of New England Conservatory.” He taught in NEC’s Jazz Studies, Musicology, and Music Theory faculties for four years—including a few graduate-level courses he created from the ground up—with an “Overall Instructor” rating of 4.85 out of 5.

While Daniel is a capable composer, trumpeter, and vocalist, his greatest skill is teaching. At BYU–Hawaii, he has scored a perfect 7.0 out of 7 in the “Instructor Overall” category on student ratings every semester in all five of his specialty teaching areas: Songwriting, Jazz Improvisation, World Jazz Orchestra, Street Band, and private lessons (composition, music production, and instrumental and vocal jazz performance). He relishes guest-speaker invitations at conferences and universities, and was the youngest member of Harvard University’s elite “Harvard Alumni Association Speakers Bureau,” with invitations to speak to Harvard alumni across North America. Daniel has also spoken at international conferences for ISJAC (the International Society of Jazz Arrangers and Composers), Echoes of Ellington, SAM (the Society for American Music), and was invited to address the faculty of the Harmony Department at Berklee College of Music.

Daniel has been the trumpeter and vocalist with the viral-sensation band The New Hot 5 for more than a decade. Their video “Jazz for Cows,” recorded spontaneously in the French Alps, has over 17 million YouTube views and was featured on Conan, Jay Leno, Good Morning America, and television programs across the globe. The band has performed internationally and across the USA, and has released four CDs of lively and humorous early jazz, featuring the music of Louis Armstrong, Jelly Roll Morton, and Sidney Bechet. Daniel also performed and recorded for 10 years as trumpeter and occasional Sinatra-style vocalist with The Beantown Swing Orchestra, and was a founding member of the Vintage Vocal Quartet.

Daniel has substantial experience as a manuscript archivist, having worked for three years in the enormous Capitol Records Manuscript Collection at Brigham Young University while completing his Bachelor’s degree in Trumpet Performance. Daniel identified and cataloged thousands of original hand-written manuscript scores arranged by Billy May, Nelson Riddle, Pete Rugolo, Billy Strayhorn, and dozens of other giants of mid-century jazz and popular arranging. He cataloged the manuscript collections of Frank Sinatra, Nat “King” Cole, Peggy Lee, Dean Martin, June Christy, Mel Tormé, the Billy May Orchestra, and many more stars of mid-Century popular music. Daniel visited the homes and conducted video interviews with many of Capitol Records’ surviving recording artists, including the great Billy May, who became Daniel’s musical hero, friend, and mentor until he passed away.

Daniel’s latest passion is learning Pro Tools digital audio software, including recording, editing, mixing, MIDI virtual instruments, and the art of the Jacob-Collier-style one-person-music-production-studio. He has begun releasing a new YouTube music video song cycle for which he is the composer, lyricist, vocalist, instrumentalist, and recording and mixing engineer. Check out Songs from the News: “LiDAR Eyes” and “Nigel, the Lonely Seabird” on YouTube.

A Word of Appreciation for my Teachers & Mentors:

I became a music professor because my whole life has shown me what a positive and profoundly beautiful impact a devoted music professor can have in the life of a student—and actually, in the life of an entire community. I want to acknowledge briefly some of the mentors and teachers that have given so much of themselves to me. My parents—both of whom are music professors—started me in music lessons at age 2 and continually nurtured my curiosity and passion for the wide world of music. I love them and am grateful for their dedication to my education.

I became a jazz composer because of Billy May (1916—2004). He was, and still is, my musical hero. We met and became fast friends in the last year of his life while I was cataloging hundreds of his hand-written scores as an archivist in the Capitol Records Manuscript Collection at BYU (scores he had written for the likes of Frank Sinatra, Nat “King” Cole, Bugs Bunny, the Billy May Orchestra, and so many others). I wrote my doctoral dissertation about his music and have spent more than one thousand hours studying his manuscripts. I think no one had a better sense of musical humor than Billy did and I can still hear his bubbling laughter to this day each time I listen to his music.

I went to New England Conservatory to study composition with legendary pedagog Bob Brookmeyer. Bob had a unique spiritual and artistic power about him, and he challenged and sculpted the way I listen to and think about music. He could somehow make a deeper impact with one pithy sentence than most others can with a thousand words. Bob got cancer and retired toward the end of my MM degree, but he kept encouraging me from afar. Though Bob was gone, I stayed at NEC for my doctoral degree to continue my studies with Dr. Ken Schaphorst (chair of Jazz Studies), who taught me private composition lessons every week for five years. Ken was the biggest surprise of my college career: quiet, unassuming, devoid of ego, always listening, and a musical curiosity that knows no bounds. I’m convinced nobody knows more about music than Ken does, and he quietly remains a role model for me in so many ways. I also studied privately with Michael Gandolfi (Head of Composition, NEC and Tanglewood), who blew my mind every week, modeling and encouraging a level of analytical detail and intellectual rigor I had never experienced in music. Other NEC teachers who shaped me the most include Allan Chase (jazz studies), Bob Labaree (musicology), Jerry Leake (West-African drumming), and Ran Blake (contemporary improvisation). Guest Artist-in-Residence composers at NEC who made a huge impact on me included Django Bates, Steve Reich, John Hollenbeck, and Roscoe Mitchell.

At Harvard, I was shaped into a better scholar by my world-class colleagues, first among them Professor Ingrid Monson, who believed in me and cheered me on from day one. I counted Professors Alex Rheding and Carol Oja as role models in numerous ways. I was lucky to overlap at Harvard for three years with my childhood trumpet idol Wynton Marsalis, whose series of lecture/recital/sermons I considered masterpieces of teaching; and for one year with Herbie Hancock, who not only dispensed wisdom during his recurring Norton Lecture series, but also let me visit his “office hours” to ask tough questions (one answer was so profound and theatrical and humorous that I can only retell it in person—ask me sometime!). Joshua Redman co-taught my class with me one day, as did Wallace Roney, and each was a model of humility and generosity. Vijay Iyer joined our faculty full-time during my last year at Harvard, pushing me into new musical territory; I arranged some of his music for jazz big band and we put on a concert together—I conducted my arrangements with him at the piano, and the collision of our two musical worlds was thrilling and invigorating. Finally, my stellar, hand-picked teaching assistants were the ones challenging me and offering useful suggestions on a day-to-day basis, in the classroom and over countless lunches at every eatery in Harvard Square: Omar Thomas, Nick Grondin, Austin McMahon, and Evan Allen.

Earlier teachers who positively shaped and inspired me along the way include Dr. Steve Call (BYU and longtime bandleader in The New Hot 5), trumpet teachers David Brown, Bill Sullivan, and Dan Rich, music theorists Michael Hicks and Matthias Truniger (BYU and NEC), and musicologists Steven Johnson and Anne Hallmark (BYU and NEC). There are many, many more. I am indebted to so many teachers for so much, and am genuinely thrilled to have found a career of my own teaching music.