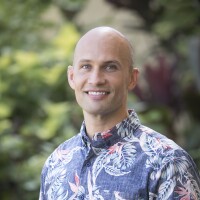 Dr. Allred graduated from Brigham Young University–Hawaii and went on to earn his graduate degrees from the University of California, Berkeley where he focused on film and media studies. As a Fulbright Scholar, he spent a year in the archives of Germany researching for his book, Weimar Cinema, Embodiment, and Historicity (Routledge, 2017), on the relationship between film and modern historical experience. His teaching and research connect new media with old—even dead—media in order to help broaden our historical view of communication history and theory. This should inspire creative media production and better equip us to engage the present media-saturated world with critical thought and attentive care. His interdisciplinary work in media studies has been published in peer-reviewed journals, such as the Journal of the American Academy of Religion, Jewish Studies Quarterly, Mormon Studies Review, and The Journal of Popular Culture. He is married to Erika (Huffman) and they have three amazing kids.