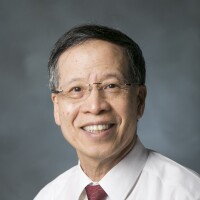 "I am originally from Taiwan and received my bachelor's degree from Tamkang University in 1973. I came to the United States the next year and subsequently earned my M.A. in English from Central Missouri State University, and my Ph.D. in English Literature from Brigham Young University Provo. My master's thesis deals with the major imagery of Dante Gabriel Rosetti’s poetry; my doctoral dissertation is entitled Roots and Buds: The Literature of the Chinese-Americans. I was twice awarded the Summer Stipend Fellowship from the National Institute of the Humanities, which allowed me to conduct post-doctoral research at both Columbia University (1981) and Stanford University (1985).

I have been a faculty member of BYU–Hawaii since 1980, and am currently a Professor of English and Chinese Literature. My specialties include Asian American literature, English Romanticism/Victorianism, and classical Chinese fiction. I have also been interested in the theoretical study of satire, Chinese poetry in Ryukyu and the Manchu generals in the early Qing Dynasty, theories about translation, and the actual translation of poetry between English and Chinese. My papers on these subjects, written in both English and Chinese, have been published in various academic journals in Taiwan, China, and the United States. I am currently working on the history of Chinese-American writers from 1850 to the present, and on the cosmology of The Journey to the West.

I believe that all masterpieces should offer joy for general readers instead of the elite. The students in my classes are encouraged to appreciate literature from any angle they like so long as there is support within the work itself. I like my classes to be full of fresh thoughts."