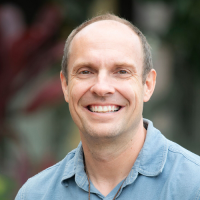 Chad Ford is an associate professor of International Cultural Studies and Director of the McKay Center for Intercultural Understanding at BYU-Hawaii. His emphasis has been in intercultural peacebuilding and mediation. He has led peacebuilding workshops and mediations around the world, including in the Middle East, Africa, Northern Ireland, Cyprus, Australia, New Zealand and the United States.

As the Director of the McKay Center, Chad leads a team of alumni and students dedicated to fulfilling President McKay’s prophecy that “from this school … will go men and women whose influence will be felt for good towards the establishment of peace internationally.” Those projects include community reconcilliation projects, peer mediation, Anatomy of Peace workshops and various other projects in conjunction with partners around the world. He also teaches a number of peacebuilding classes in the program including “Interrcultural Peacebuilding”, “Cultural Mediation”, “Culture nd Conflict Transformation”, “Intercultural Conflict Dynamics: and the senior capstone class.

He is the author of Dangerous Love: Transforming Fear and Conflict at Home, at Work, and in the World (link: http://www.dangerouslovebook.com)

Chad also works on several projects outside the center. Currently he's partnering on a major project in the Middle East and in several cities in the US with the Arbinger Institute and PeacePlayers to create sustainable peace between communities in conflict.

Chad has a bachelor's degree in History from BYU-Hawaii, a master's degree from the Institute for Conflict Analysis and Resolution at George Mason University in Conflict Analysis and Resolution and a Juris Doctorate from Georgetown University Law School. He also was the co-founder and former CEO of Sportstalk.com, a highly successful internet start-up that was purchased by ESPN in 2001. Chad spent several years as a senior editor and writer at ESPN before leaving his full-time position in 2005 for his current posts with the McKay Center.

He enjoys running in the mountains in his spare time.