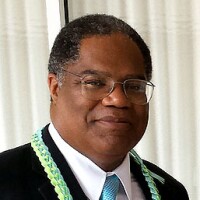 Marcus H. Martins holds a bachelor’s degree in Business Management, masters in Organizational Behavior, and a Ph.D. in Sociology of Religion, Race and Ethnic Relations. A native of Rio de Janeiro, Brazil, he worked as a systems analyst and project manager for the Brazilian government and as a freelance consultant before moving to the United States in 1990. He served as Chair of the Department of Religious Education at Brigham Young University–Hawaii, and teaches Church Organization and Leadership, Marriage, and occasionally Managerial Leadership. Previously he taught at BYU and Ricks College, and has lectured on a variety of topics throughout the U.S., Brazil, Hong Kong, Japan, and Malaysia. Among his topics of interest are: strategic management in a global environment, computer technology, languages, law, politics, and world cultures. His current research focuses on temple symbolism, the implications of the doctrines of the restoration on daily religiosity, and the impact of globalization forces, technology, and immigration on the growth of the Church of Jesus Christ of Latter‑day Saints. He wrote the book “Setting the Record Straight: Blacks and the Mormon Priesthood” published by Millennial Press. Brother Martins joined the Church of Jesus Christ of Latter-day Saints in 1972, and in 1978 became the first Latter-day Saint with Black African ancestry to serve as a full‑time missionary in the twentieth century. Since then he has served as a mission president, twice as bishop, six times as stake high councilor, and also as temple officiator, and translator of the Book of Mormon. He married Mirian Abelin Barbosa and they have four children and seven grandchildren.