Dr. Smith's primary fields of interest are federal systems of government, complexity and public policy, and American government. He is a fellow at the Center for the Study of Federalism, and editor of Federalism in America: An Encyclopedia.  His academic work has appeared in Publius: The Journal of Federalism; The Review of Politics; Congress & the Presidency; Thinking Skills & Creativity; and others. Dr. Smith first became interested in federalism when his east coast graduate friends argued for reintroducing wolves in the Rocky Mountains but opposed their reintroduction in the Adirondacks. His interest spiked when, as an intern with the U.S. Senate, he watched quarrels between his senators and the governor. Channeling his insights, he wrote a paper on how members of Congress responded to lobbying by state officials that won the “Best Paper in Federalism and Intergovernmental Relations” at the 1998 A.P.S.A. Annual Meeting. Dr. Smith loves learning and tackling challenges whether that be teaching students about federalism, writing, and reasoning, climbing cliff faces, playing classical guitar, or coaxing Hawai'i's fish to his spear.

"Covenants, Constitutions, and the Citizenship of Self Government" (Faculty Forum Presentation, March 2018)

"The Problem of Peace" (Presented to the BYUH Honors Society, 2008)

“A Compound Republic – If You Can Keep It: Martha Derthick’s Empiricism and the Value of Federalism," Publius: The Journal of Federalism (Spring 2017).

“Responses to Rubin and Feeley,” by Troy E. Smith and J. Cherie Strachan, Publius: The Journal of Federalism (Spring 2008). 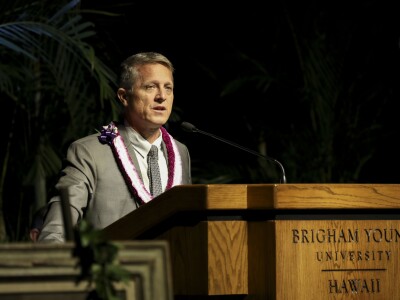